An Ontario Gem: The 1000 Islands Region

In between the Montreal to Toronto corridor, there’s a small town in Ontario that is starting to make some big waves. That town is Gananoque and Mother Nature has bestowed upon it some of the most beautiful, natural sites in Canada: The 1000 Islands.

The 1000 Islands actually consist of 1,864 islands that span a 50 mile radius along the St. Lawrence River that runs from Kingston to Gananoque and as far as Brockville. Formed almost 12,000 years ago from receding glaciers, the islands range in size. These granite islands scattered throughout the river mark the transition point between the Canadian Shield and the Adirondack Mountains to the south. The biggest is Wolfe Island with a population of about 1,400 but there are also smaller islands, occupied by single family homes and even uninhabited islands that are not much more than a rocky shore. To see these islands dotting the St. Lawrence River is a sight to behold whether you’re viewing it on the water in a boat, above in a helicopter ride or from the shoreline. One of the best places to experience all the 1000 Islands region has to offer is in Gananoque; the centre of overlapping natural boundaries and the perfect launching point to see all the area has to offer.

The 1000 Islands area also includes not just one but two recognized UNESCO sites: the Rideau Canal and the Frontenac Arch Biosphere. Each region is steeped in history and natural characteristics that make each of these sister sites unique and identifiable.

Only a short drive from the Town of Gananoque is the beginnings of one of the greatest man made achievements Canada has to offer. The Rideau Canal, inscribed as a UNESCO World Heritage Site by UNESCO’s World Heritage Committee in 2007, connects the rivers and lakes between Kingston and Ottawa. Officially opened back in 1832, it is one of the oldest operating canals in North America. Construction on a secure supply route began in 1826 with Colonel By and a team of Royal Engineers assigned to design and supervise it’s construction with an estimated 2,000 to 4,000 labourers. The finished result was a 202km waterway connecting Kingston and Ottawa with 47 masonry locks and 52 dams. The canal still remains fully operational, allowing water traffic to travel the historic route and enjoy the multiple destinations that rest along its shores. Kayaks, house boats, paddle boards and any assortment of watercraft peruse the canal and lock stations.

Chaffey’s Locks promises the perfect stop on the Rideau Canal. This impressive lock station is a focal point for visitors and locals alike, with stunning views and a plethora of activities to help you make the most of the area. For those visiting the area, Rideau Tours offers the opportunity to experience the canal by water with rentals and guided tours for all experience types. Rideau Tours also offers bike rentals for those inclined to experience the canal by land, or to access the revered Cataraqui Trail. This 104 kilometer trail system connects Smiths Falls to Napanee through a series of paths, fields and communities that make it possible to hike the entire length of the trail. Chaffey’s Locks is also home to the historic Opinicon Resort – originally built as a private residence in the late 1870s and quickly became a favourite destination for fishermen and tourists by 1921 when it was opened to the public. The resort has been renovated and updated to meet modern day demands but retains its iconic appearance and picturesque exterior. It makes for a must-see spot and is the perfect place to grab lunch, dinner or some ice cream during your day out exploring!

Westport is another small community that makes its home along the shores of the Rideau Canal waterway. This picturesque little community hosts a multitude of perfect places to kick back and relax, including the Westport Brewing Company and the Scheuermann Vineyard & Winery, or any number of local restaurants to enjoy a hearty lunch, dinner or grab a snack. Take a walking tour to get the lay of the land, or visit the Rideau District Museum to get the full history of the village. Westport also is home to the Foley Mountain Conservation Area, part of the Rideau Valley Conservation Authority. Complete with a discovery and interpretive centre, it’s the perfect place to go for a swim or get an aerial view of the village of Westport from the scenic lookout of Spy Rock on their 10km trail system.

No matter which way you choose to enjoy it the Rideau Canal combines the history of area with adventure and stunning natural beauty.

The Frontenac Arch Biosphere is one of the great crossroads of Eastern Canada and consists of an ancient granite bridge, called the Frontenac Arch. It is one of 18 biosphere reserves in all of Canada and was included in the UNESCO programme in 2002. It encompasses a total of 2,700 square kilometres, including part of the traditional territories of the Anishinaabe (Algonquin) and the Haudenosaunee (Iroquois) people – extending north of Kingston to encompass Harrowsmith, Verona, Westport, Gananoque and Brockville. The Biosphere is home to a variety of unique fauna and flora, and can easily be identified by the granite and limestone outcroppings that trademark the area. The best way to enjoy the biosphere is by immersing yourself in the natural environment of the area, whether on the water or finding yourself on one of the many hiking trails that can be found throughout the region.

Nature lovers have visited the area for years because of the wonderful views and plentiful wildlife. In the spring, bird watchers flock to the area so see the migration of waterfowl. You may also spot wild turkeys, ospreys, and even a white tail deer. If fishing is your thing,  the islands have always been a famous fishing destination, home to bass, pike and perch. 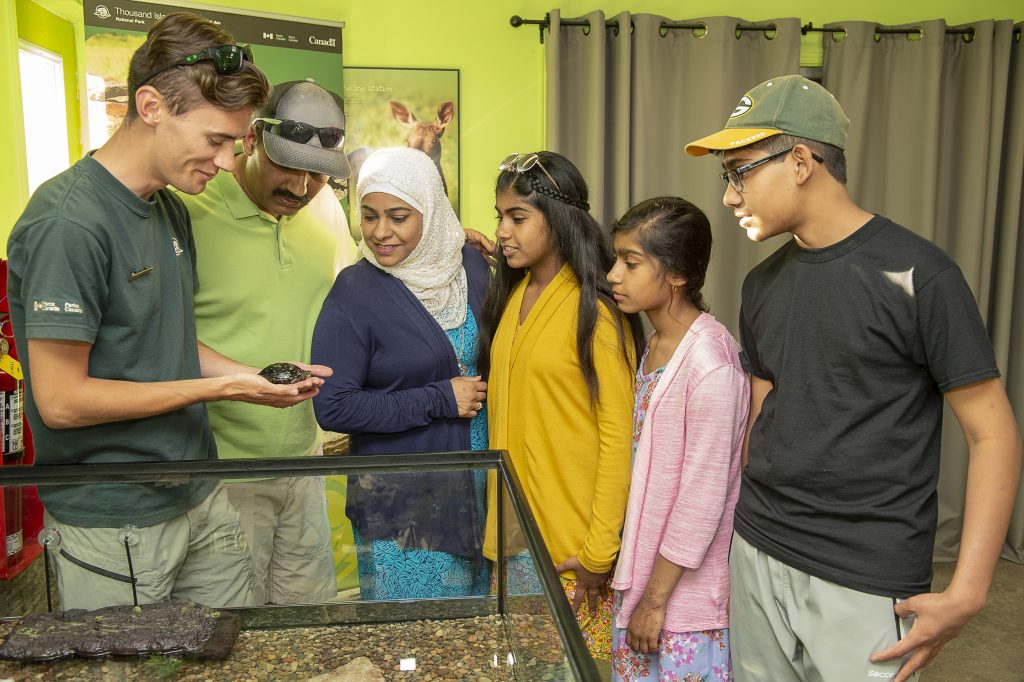 The Frontenac Arch Biosphere has an extensive collection of unique and beautiful creatures that call the area home. Many of these species are found nowhere else in the world, and some have a tenuous hold on their existence within the biosphere – calling for conservation and protection of the region’s waterways and wildlife. For wildlife lovers, there is a variety of animals you won’t want to miss during your visit to the area:

The area has had a re-emergence of the Bald Eagle population after conservation efforts were enacted in the 1960s. Their numbers in the area have increased enough that in 2007 they were officially removed from the endangered species list. You can sometimes spot these majestic birds out over the water in the Thousand Islands region, hunting for fish or resting on the tops of trees on the islands.

The Blanding’s Turtle can be found throughout the biosphere, overwintering in the bottom of lakes, ponds and wetlands and is known to travel several kilometers. These little guys can live up to 75 years in the wild, but are currently facing extinction – when visiting the area by car be sure to avoid turtles on the roadways and respect the distance of those you may find on the shores of the river or ponds.

Now, many people are not fans of snakes – but the Gray Rat Snake that calls the area home is one of gentle nature and more likely to flee than fight in the presence of humans. These snakes can grow to be 2.5 metres long and are avid climbers and may be seen sunning on branches or hiding in rock outcroppings to stay cool in the hot summer afternoons. These beautiful creatures are a threatened population in the area mainly due to misplaced fear – when visiting the area, if you encounter one of these gentle giants, be sure to enjoy the rare sighting but leave our friend to enjoy the area.

Avid birders will also want to keep an eye out for Peregrine Falcons that call the area home and are considered one of the world’s fastest animals. These amazing creatures were removed from the endangered species list in 1999 after captive breeding programs allowed them to be reintroduced after the threat of toxins built up within the population reduced. Though no longer endangered, these birds are still tracked and observed.

Gananoque is the perfect hub to connect you to all the stunning natural ecosystems that can be found throughout the region, and is conveniently located to allow you to experience not one, but two UNESCO designated sites. No visit to the area would be complete without immersing yourself in the history and natural wonders of the area – from experiencing majestic wildlife to traversing historic waterways, Gananoque and the 1000 Islands region is certainly a stunning gem that simply cannot be passed by on a trip through Ontario.